Interpersonal Awareness:  The ability to notice, interpret, and anticipate others’ concerns and feelings, and to communicate this awareness empathetically to others.
a) Understands the interests and important concerns of others.
b) Notices and accurately interprets what others are feeling, based on their choice of words, tone of voice, expressions, and other nonverbal behavior.
c) Anticipates how others will react to a situation.
d) Listens attentively to people’s ideas and concerns.
e) Understands both the strengths and weaknesses of others.
f) Understands the unspoken meaning in a situation.
g) Says or does things to address others’ concerns.
h) Finds non-threatening ways to approach others about sensitive issues.

When behavioral indicators are used in a specific competency model, they are sometimes altered or written more specifically, to describe how the behavior is demonstrated in this job. For example, indicator (b) above was rewritten for use in a sales competency model:
“Notices nonverbal behavior and asks questions, when appropriate, to clarify its meaning”

The second option for behavioral descriptors is to use evaluative competency levels. Under this option, several key dimensions are identified for each competency, and each dimension is ranked in order of effectiveness. The highest level describes outstanding performance, and the lowest level describes poor performance. Lyle and Signe Spencer used this approach to develop a generic set of competencies with levels. For example, one generic competency, “Interpersonal Understanding,” has two aspects: (a) depth of understanding of others, and (b) listening and responding to others. Listening and responding to others has these levels:

Rating scales with three or more levels for each dimension of a competency are generally too cumbersome. There are too many behavioral descriptions to read, when assessing someone on twelve competencies, each with two to four dimensions, with each dimension further broken down into four or more descriptors of different performance levels. It may be more useful to specify only the highest and lowest levels, as in the following example of a rating scale used to assess a competency called “Personal Credibility:”

Creating behavioral descriptors in the form of evaluative performance levels is most useful when performance appraisal is planned as an immediate application. Once the competencies for the job are identified, the content for the rating scales can be determined by meeting with managers of persons in the target job. Key evaluative aspects for each competency can be discussed and identified.

A third option for descriptors is to create levels describing the extent to which a competency is required in a particular job. This alternative is most useful when the multiple competency models are being created within an organization and the Human Resources staff need a way to distinguish the requirements of the different jobs (e.g., to help people within the unit plan career progression paths).

This approach was used in developing competency models for a variety of jobs in the commercial sales division of a manufacturing company supplying optical fiber for the telecommunications industry. The first step was to agree on a set of generic competencies, including both technical and non-technical ones, to describe the skill requirements for jobs in the commercial sales division. This was accomplished by reviewing, modifying, and adding to a generic competency dictionary. Next, drawing on the generic competency dictionary and other projects involving competency levels, a set of levels for the competencies was drafted. Drafting the levels required first identifying several key dimensions for each competency and then writing behavioral descriptors of several levels. In this case, the internal Human Resources project team wanted three levels specifying basic, intermediate, and advanced demonstrations of each aspect of each competency. The levels for one competency, “Energizing Others,” are shown below: 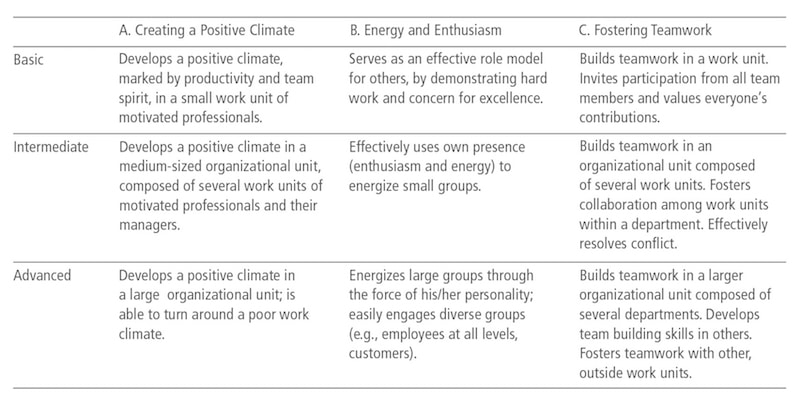 As one moves from the basic level to the intermediate and advanced levels, the competency is demonstrated in larger groups and more challenging situations. The behavioral descriptions often target performance outcomes rather than specific behaviors demonstrated to achieve the outcomes.

When planning the development of a competency model or models, there are practical considerations that affect the design of the project, the format and content of the competency model, and the success of the project’s implementation. The following seven questions may be useful to Human Resouces professionals responsible for planning and implementation:
1. What HR application should be included in the initial model building project?
2. What will the key users of the model need from it?
3. How should key stakeholders be involved?
4. How extensive should the data collection be?
5. How should research be balanced with intuitive approaches?
6. What format of behavioral descriptors will best suit the application?
7. How can additional, future competency models be accomodated?

To learn more about our products and services, and how competencies and competency models can help your organization, call 800-870-9490, email edward.cripe@workitect.com
or use the contact form at  Workitect.